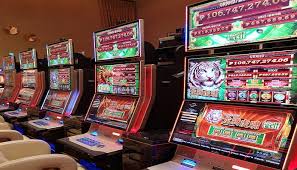 While casino games developer Aristocrat concentrates on developing slots games for land-based casinos, a number of their slots offerings are becoming available in online casinos too. Availability will vary according to the jurisdictions in which players reside, but they can access games in Aristocrat’s Gold Pays series either online, or on the floor of a local land-based casino.

Golden Festival is the second digital slots game Aristocrat released in the Gold Pays series, and it has adopted an Asian theme, along with Aristocrat’s signature bright colours, detailed graphics and powerful animations. Frequent sound effects and fireworks also enhance the action. Apart from some impressive winning features in normal and bonus play, Golden Festival Gold Pays has four different standalone jackpots, and a table at the top of the screen lets players know how much each is worth at any given time.

Aristocrat’s Golden Festival Gold Pays plays like most slot machines, in that players need three of a kind or better on a bet line, starting on Reel 1, to win a prize. Unlike the other slots of similar theme.  the game uses five reels displaying four rows each, and has 60 bet line options. Basic poker symbols 9, 10, J, Q, K and A are the low-value icons, and higher-value symbols all conform to the theme, using icons considered lucky in Asian culture.

There is a golden fish, a fan, a pile of wealth, a lotus blossom, the Chinese character for “Luck”, etcetera. The “Gold Pays” feature turns all these symbols golden from time to time, making wins worth more. Players can also buy additional golden symbols to increase their chances of winning. A pay table at the top of the screen lets the player know what any combination of symbols is worth at any stage, so players will know when the machine is offering the biggest payouts.

The Golden Lotus is the bonus symbol, and three or more in succession from Reel 1 will trigger the bonus free spins round. Players can choose between a number of options for this round, to increase of decrease the volatility of the game. For example, they can choose 20 free games with 8 extra Wilds, or only 5 free spins but with 38 extra Wilds in play. They can also pick a balance of free spins and extra Wilds between these two extremes.

In normal Golden Festival Gold Pays play, the Wild icon is a string of firecrackers, and it substitutes for any other symbol including the Golden Lotus, so Wilds can be included in the winning bet line that triggers a bonus round. The firecrackers explode in dazzling animations when included in a win and when the whole screen explodes in firecracker frenzy, the progressive jackpots bonus game is triggered. This takes place on a second screen, with a player offered an assortment of 12 tiles to choose from. The first tile turned over will determine which of the four progressive jackpots the player is playing for. The player must then match three of a kind of that symbol to win the jackpot.