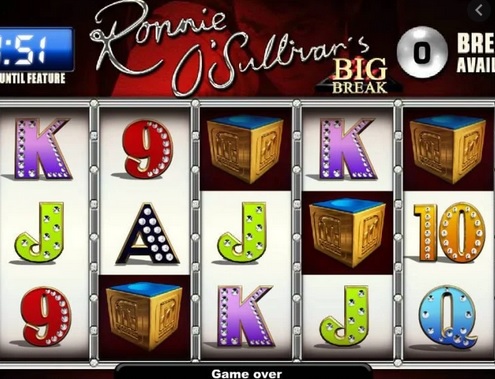 Ronnie’s Big Break, developed by Mazooma Interactive, is an online slot game with five reels and twenty paylines.  Ronnie’s Big Break is based on one of the most successful snooker players in the world, Ronnie O’Sullivan also known as “The Rocket”.

This online slot game includes many bonuses and prizes.  Ronnie’s Big Break can be played on all platforms including iPads and mobile devices.  For those who are new to the game of snooker players can wager from as little as 0.01 coins for each spin.  Ronnie’s Big Break features fun animations and sounds, with diamonds falling whenever a player wins.

Symbols include chalk and fifteen red snooker balls.  Also included are diamond studded playing cards, nine, ten, Jack, Queen, King and Ace.  There is a wild symbol, simply labelled Wild and a “Pick a Pocket” symbol which activates the free spins round.  The cue ball is found within the “Big Break” feature.

The aim of the game is to find the cue balls, which will decide how many breaks are awarded.  Once the feature has ended the Big Break Bonus is activated and players have to hit the cue balls into the pockets and these wins are then multiplied.  The shots that are more difficult will award the larger multipliers.  Players can expect multipliers of up to seventy times their wager and possibly also larger prizes.  These are based on the total bet and not the bet per payline.  Ronnie’s Big Break, unlike a real game of snooker where it is virtually impossible to sink all the pockets, players are able to sink all the pockets from just one break.

The Wild symbols will double all prizes when they act as a substitute for one of the other symbols, except the Pick a Pocket and Cue Ball symbols, to create a winning combination during the base game.  A win that has between one and four wild symbols will payout double the standard win.  During the free spins round they will be multiplied by five.  The free spins, Total Bet multipliers and the Prize multipliers are activated by between three and five Pick a Pocket symbols.  Three of these symbols will award a multiplier of two times the total wager; four spins will award a multiplier of ten times the wager and up to 210 free spins. The Big Break symbols will activate the Big Break Feature.  Players must first find as many cue balls as they can, while the clock ticks down and each cue ball found means a break.  Whenever a ball is sunk on one of these breaks a prize is awarded depending on the value of the cue ball which is multiplied by the pocket multiplier.

Rules of the Game

All payline wins will be multiplied by the value of the wager of that particular winning line like in similar slots at online pokies sites in Australia.  Non-scatter symbols must appear on a valid winning payline and on successive reels starting with the far left.  It is the only the highest line win which is paid out.  The valid payline wins are combined and paid out.  The bonus symbols are paid out in any position on the reels and multiple scatter bonuses can be won in any single game.  The scatter symbol will activate bonuses as well as payline wins.  Maximum wins are capped and can be viewed on the paytable.  A transaction will include all spins and the bonuses awarded throughout the game.

One of the best features of this game is the Big Break feature and is activated every four minutes which makes for an entertaining, fast paced game.