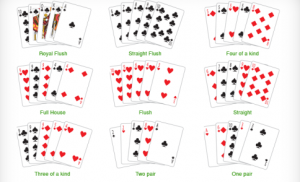 Before you learn the rules of the game of poker, you need to understand something that many people don’t realise – there is more than one type of poker. And, depending on the game you’re playing, the rules, application of hand rankings, number of rounds, number of hidden and shared cards, and betting options change. So it’s important to know the difference between Texas hold’em, casino hold’em, five-card stud, Omaha Hi Lo, and all the other poker variants.

Get on Top of the Basics

Although the rules vary between the different game types, there are certain rules of the game of poker that generally apply across the board.

Firstly, poker almost always involves a standard 52-card deck. When the game is played, a certain number of cards are dealt to each player and a certain number of cards, called community cards, are shared amongst all players. Player’s personal cards are visible to them alone. The objective is generally to use all the cards available to you to form the best possible five-card hand. The standard poker hand ranking system is always used, with a few adjustments from game to game.

The rules of the game of poker generally stipulate that all players place a forced bet or ante before the cards are dealt. All bets are combined to form the pot, which will go to the winner/s at the end of the game.

Once all the players have received their cards, play generally proceeds in a clockwise direction and each player may take certain actions when it is their turn. Their options usually include checking, betting, folding, calling, and raising.

According to the rules of the game of mobile poker Australia, you may only check in a round where no bet has been placed. A check passes the game to the next player. Another option open to you if no bets have been placed yet is to bet. This decision will depend on the value of your hand and its potential to beat those of the other players.

If however, a bet has already been placed by the time your turn comes around, you may either fold, call or raise. Folding means forfeiting all your bets, including the ante, as well as the option to continue playing. Alternatively, if you’re confident in your hand, you may call, which means matching the highest bet made so far in the round. If you’re feeling even more optimistic, you may choose to raise by matching the highest bet and adding an additional bet.

The rules of the game of poker often allow you to bluff – for example, by calling or raising, even though you have a bad hand. If you manage to fool all the other players into folding before the hands are revealed, some variants allow you to win despite your band hand!

Finally, the rules of the game of poker also vary in terms of betting limits so it’s important to know whether you’re playing no limit, pot limit, fixed limit, or spread limit poker.